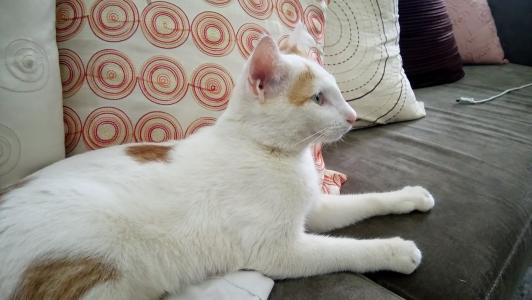 I was in the sitting room when I heard a loud sound like a dog or cat being suffocated. I immediately realized that I had opened Rex (My Caucasian breed of dog). Rex usually fights with Paul (My Japanese Spitz) but I locked Paul to open Rex to avoid a fight. I thought Paul came out somehow from his cage to fight Rex. I ran out to know what was happening. Paul was inside his cage safely I became even more confused. Rex was behind the cages, I went there to see what he was doing there.

Smiggle, my black cat was lying unconscious in front of Rex. Smiggle was in the habit of going to the window to watch the dogs whenever I released them in the night. The dogs will bark endlessly when I leave the lights inside the house on because they can see Smiggle. It’s always like they want to catch her and harm her so I always leave the lights off in the night to avoid that craziness.

Smiggle never crossed the window to go outside so I didn’t understand what transpired that night. I went close to rescue Smiggle, Rex tried to attack me so I just took a picture. I called Rex several times to leave the scene so I can rescue Smiggle but he refused to respond to my call. I tried to use food but when I returned I saw Rex chewing Smiggles head and that was terrifying. Although he eventually vomited everything.

Freddy, the male cat who loves to play with the dogs knows that Rex has evil intention towards him and knows how to avoid him. Freddy was the only cat companion to Smiggle, I guess he knows how Rex caught Smiggle. When I release the small toy dogs he would come down to play with them. Although he doesn’t like it when all the dogs want to play with him at once so he will just climb the fence and leave them. Each time he sights Rex, he never hesitated to climb the fence where Rex cannot reach him.

Freddy is so funny that he sometimes would lie on the fence watching Rex trying to jump and get him. He is sure Rex cannot reach him and would ignore him totally. Rex has tried all the techniques he could think of to get Freddy but always failed. Now he tries to ignore Freddy.

I love the fact that Freddy is very smart and has survived Rex’s terror. At least I still have a cat.