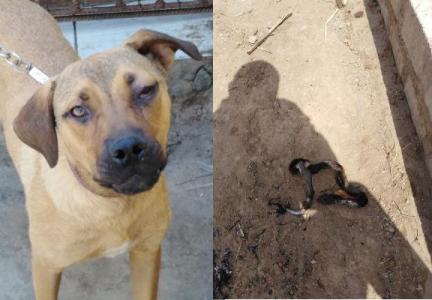 It was very early in the morning, at about 3am, in Zhidu settlement of Abuja, a town beyond Lugbe settlement, the owners of these two dogs heard some growling from their dogs. They are two dogs, one a German shepherd mix with a local breed of dog and the other a local breed. These dogs are in the habit of chasing lizards and chicken. The sounds they made was very similar to the one they made during the snake attack.

As the growling continued, one of the dogs shouted as if in deep pain and the owners had to come out to see what was going on. They saw a viperlike snake in the middle of the dogs trying to defend himself from an attack by two angry dogs.

The dogs were attacking the snake from both front and back. The dogs were really determined to brutalize the snake. When the snake became weak the owners now mustered some courage to finish off (killed) the snake.

I arrived when the snake was already killed and burnt so I saw little of the colour and scales in order to determine the type of snake it was. From what I could see the snake must have been a viper or cobra. It possessed some thick scales below the mouth down and a short head. The rest of the body is all scales but not as flat as the ones below the mouth part.

The swollen eyes of both dogs had no bite wounds so I guess it was a splash of the snake saliva or venom which induced some inflammatory reaction and led to the swelling. We took care of the dogs, they responded well to treatment and are doing fine now.

We were fed with similar stories of the same incident involving other dogs around the area. In all the stories these two dogs were the only ones to sustain any form of injury. The rest of the other incidences only ended simply with a dead snake and happy dogs (hunters). The area is virtually surrounded by thick bush that is drying up due to dry season. Maybe the snake was looking for a better place to migrate to and stumbled on the vicious dogs.