According to the news of this gruesome attack that took place in the barracks where a dog attacked a 13 months old baby and tore his scalp in rage which happen on Tuesday 9th of October 2019, was reported by Punch. Some eyewitnesses said the dog was a “Pitbull” and that some brave person went with a cutlass to save the little boy from the attack. It was reported that the boy is battling for his life in the hospital as the injury he sustained was terrible.

I read this news with a heavy heart because I can imagine what a kid of that age will be going through in the hospital trying to survive the attack. I sincerely wish the baby a complete recovery from injuries sustained in the attack.

From the picture presented as the dog and the injuries sustained by this little boy, I have some reasons to doubt the account that was made by the eyewitnesses as reported. First of all the dog in question has no resemblance to Pitbull terrier. The colors and facial conformation has no link to that breed of dog. Some people on facebook said it was a Rottweiler which I strongly doubt also from the color of the dog. Rottweilers don’t come with solid black colorfully rather they are decorated with some brown markings at the eye region and some other places like the chest and legs.

I suspect that the dog was actually a pug. I tried to use the gutter slabs to estimate the size of the dog and I am still yet to believe it’s a breed other than a pug. See the picture of a pug and compare... 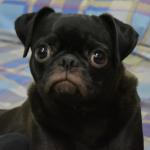 Pugs are toy dogs that are completely harmless. In fact, they are mostly kept indoors as pets. Pugs will mostly play with a child rather than bite the child.

The cut on the head of the boy from the photos provided has an almost perfect tear giving an indication that it was done with a sharp object but not the teeth of a dog. The slit, if it can be linked to the eye witness account might be from the cutlass that was used in an attempt to free the boy from the grip of the dog. The teeth of the dog will only create irregular holes on his head rather than a perfect tear. See photo below...(viewer disgression is advised please) 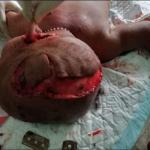 If by any chance the eye witness account is correct except the breed of dog which I will doubt vehemently then it’s an unfortunate thing to happen but it is completely possible. As a veterinary doctor, I have been called several times during and after cases like this although not this degree of injury. It is an event that happens unfortunately especially when the dog is very aggressive or just aggressive. These attacks usually happen within the territory of the dog and rarely outside. The eye witness account, in this case, did not indicate the location of the child so it’s difficult to say if the child was an intruder or if the dog attacked away from his territory.

People on Facebook were making unfortunate comments that this is why they hate dogs, some said they never loved dogs without knowing that they are the ones who are highly endangered. If the eyewitnesses acted on time without throwing stones at the dog the boy will not have sustained this much injury so knowing how to handle dogs would have been an asset at that moment.

I don’t know if the dog has been disposed of but a postmortem would have been necessary to determine if the dog had rabies.

I write this article not to cause more controversy on this matter but to correct some inconsistencies as a professional in this area. I strongly sympathize with the parents of this little boy because they will be going through a lot right now trying to save this child. I also pray for him to recover from this attack.

Let me advise dog owners to keep their dogs in check because some people will naturally run at the sight of dogs whether aggressive or not. Sometimes dogs see anyone running away from him to have a bad intention and will naturally chase the person and sometimes not necessarily to bite the person but to stop the person from running. The stones thrown at the dog might even be misinterpreted by the dog to mean that he should attack further.
1 Comments